The information below identifies allowable snow parking locations during a snow emergency in the City of Salem. Please note that most Salem Public School lots are NOT allowable off-street winter snow emergency parking. On-street parking on several streets and other sites that have been identified as wide enough to enable parking during snow emergencies is permitted, as well as parking in other City lots and garages, as indicated on the map and table below.

Again, Salem Public School lots are not allowable as snow emergency parking locations, except as specified below. Parking a vehicle in a school lot during a snow emergency will result in a ticket and tow.

Where alternative parking locations are on-street, residents parking in those locations must park between the posted snow emergency parking area signs. Vehicles parked outside of the signed area are subject to ticketing and towing.

Park lots and other past snow emergency parking locations continue to remain available, as well.

Vehicles parked in any non-garage snow emergency parking location, including the new alternative on-street parking sites (Sargent Street, Congress Street, Collins Street, Szetela Lane, Beacon Avenue, and Lathrop Street) are required to be removed within six hours of the end of the snow emergency parking ban, unless otherwise posted or specified. Note that vehicles parked at Shetland must be removed from the lot within 30 minutes of the conclusion of the parking ban.

The only exception to this would be for vehicles parked at the Bates School basketball court, the designated central lot at Salem High School, the marked perpendicular spaces on Salem Street immediately behind the Saltonstall School and Palmer Cove, and the Jackson Street and Broad Street Park spaces. Vehicles in these school locations are required to be removed no later than 6:00 a.m., whether or not the parking ban has been lifted, unless otherwise notified. If snow emergency parking in these locations is extended beyond 6:00 a.m. on a given day, it will be posted at salem.com and on the City's social media accounts.

Snow removal at snow emergency parking locations will not take place until after snow clearing operations on City streets are completed. Please plan your vehicle needs and access accordingly. 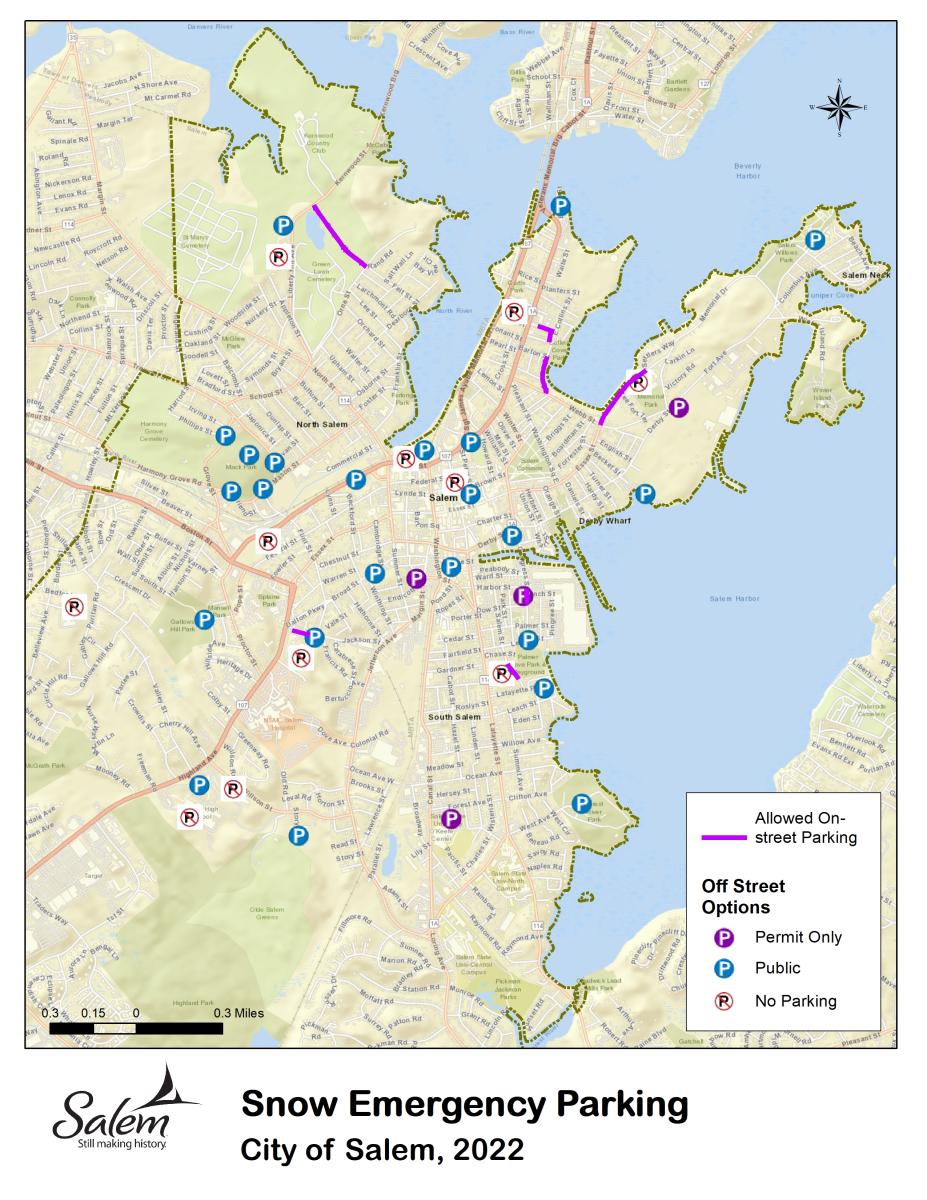 The City recognizes that businesses and restaurants continue to operate during snowfall, so this district designation allows patrons to park on these specific downtown streets for a longer period of time when there is snow. The parking ban time in downtown will be declared for each snow storm. For example, if a snow emergency is declared to become effective at 8:00 p.m., the City may separately enact a 10:00 p.m. parking ban declaration in the Downtown Snow Emergency District defined below.  Any vehicles parked on streets in the district after the declared time will be ticketed and towed. The streets included in this district are as follows:

Please be aware that snow plowing will still take place in this district during the entire snow event.

City of Salem's Snow Emergency Central
Welcome to our comprehensive online directory for all the information you'll need during Snow Emergencies and winter storms in Salem.

Please refer to the red banner on the top of the Salem.com homepage.
(If no banner appears, there is no Snow Emergency in effect).

Salem residents can sign-up for the City's CodeRED Alert System to receive notifications on Snow Emergencies via phone, e-mail and/or text by clicking here.

When a Snow Emergency goes into effect, vehicles must be removed from all City streets and sidewalks. Failure to do so will result in ticketing and/or towing.

All vehicles must be removed from these parking locations following the cancellation of the snow emergency (weekends included) or vehicles will be towed at the owner's expense.

The City treats and plows high priority sidewalks and shared use paths. Click here for a map of these areas.

Residents should report winter storm related issues by emailing snow@salem.com. Use this email address to report plowing issues, cases of snow left on or obstructing a sidewalk, and other similar snow-related issues.

The removal of the snow and ice from sidewalks is greatly appreciated. This will help school children, the elderly, and the general public from having to walk in the street. The City of Salem clears designated sidewalks following each storm. It takes time to accomplish this task and it is only done after all the roads have been cleared.

There are city ordinances requiring property owners to remove snow and ice from their bordering sidewalks within six hours after the snow ceases to fall or the city's snow emergency lights are turned off, whichever time is later. If the snow ceases to fall and the snow emergency lights are turned off in the nighttime, the snow shall be removed before 12:00 noon. If he/she neglects to do so, he/she shall be fined $25 for 1st offense, $75 for 2nd offense and $100 for 3rd and subsequent offenses.

While the Department of Public Services tries to minimize the amount of snow that gets plowed across driveways and exits, it is unavoidable. Clearing driveway openings is the responsibility of the property owner. Plow blades cannot be lifted as they pass by a driveway. Unfortunately, snow will be plowed into driveways as we perform curb-to-curb plowing. You may wish to clear your driveway several times during the storm or wait until the storm and plowing activities have ended.

IMPORTANT NOTE: Snowplowing, shoveling, or throwing snow back onto the street when clearing driveways and sidewalks is prohibited by City Ordinance and violators can be fined $75 for 1st offense, $150 for 2nd offense and $200 for 3rd and subsequent offenses.

Help us stop street flooding by shoveling out catch basins near your home.

There are many fire hydrants in the City of Salem. Please help Keep Salem Safe by shoveling around the hydrant(s) near your home.

Winter sand is available for residents (only) at the Department of Public Works Garage located at 5 Jefferson Avenue. Please limit yourselves to (2) pails per visit.